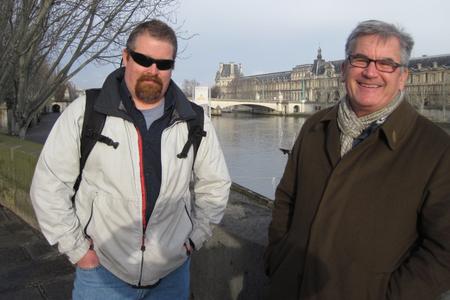 From Knickers to short pants...

We left Newport on a cold windy day early in December, with 7 very competent and professional crew members from all sorts of yachting backgrounds. in fact the most professional crew I have had the pleasure of working with in my career  as of yet. The first night at sea was a bit bumpy, most of the crew proved to have pretty strong stomachs. we had set a course on starboard tack, the breeze constantly building throughout the night, from somewhere around 20kts, seeing sustained puffs at some points at 45kts...... that is by far the most breeze I have ever sailed a boat in.... the boat just ate up that breeze and spit it out, it took it like a champ, not a thing on the boat squeeked, or rattled..... we just kept truckin along.

On December 3rd, I awoke from my deep slumber (there is no better sleep than in rolling seas aboard a superyacht), to blue skies, steady 20kt breeze, and big rollers.... exactly the kind of sailing weather I wished for my birthday! I had started my day like I do ever day, with my cup of coffee, three days in and I had finally gotten used to how to carry/drink my coffee without spilling it. I grabbed my ipad and headed to the cockpit to check on the watch crew and to sit in the cockpit to watch the waves, read my book, and check in with the internet world (yes, I said internet.... we had wifi the entire trip :). I chatted it up with Carrie and Ian, and gotten a briefing of what they had seen during their watch, apparently it was quite an exciting one.... I don't quite remember the details, but something along the lines of.... they passed a ship, had to trim sails, and found a new xm station to listen to.... in the middle of the ocean, that is about all the excitement you want, if you get my drift. Later that day during my watch, Carrie brings me a cupcake with a candle to blow out and gets everyone on deck to sing me the birthday song...... It was definitely a great way to spend my 28th.

A few days later, the waves recede from big rollers to little ones, the breeze dies down to around 15kts as we pass Bermuda, the water is blue, and warm... perfect for fishin! We caught 2 Mahi, tossed them both back because the chef refused to cook them. Later that day into that evening was one of the most beautiful, and memorable nights of my life.... I got to see one of the most beautiful un-obstructed sunsets I have ever seen, followed by a full moon rising with little to no clouds in the sky, the most memorable part though was the few moments between the sunsetting, and the moon rising was pitch black, where you could see tons of stars, and watch the phosphorescents bouncing off the keel, lighting up the wakes.  The sea is a beautiful place, and even though you are surrounded by nothing, there is always something to look at.

We finally reach St. Marteen at around 0330 on December 7, we set a hook just outside of the channel to go into Simpson Bay (Where all the big boy yachts are docked). We arrived on my watch so I am wide awake, ready to watch the sunrise over land.... haven't seen that in days. Ian, one of the crew and I toast to arriving to paradise safely with a cold beer. Ok, now for the best story of the trip. It was about 0600, just after the sun had come up that day, Carrie was eager to jump into that crystal clear water, so Dave the captain had put down the boarding ladder, she came up with a towel in hand, Dave made a fleeting comment that HE was going to wait a while to jump in the water (he is an avid swimmer), none of us on deck including Carrie had really taken Dave's comment to heart at the time. So Carrie climbs over the lifeline, and dives into that crystal water..... Ian, taking a peek over the side giggling and pointing into the water, sarcastically mumbling "breakfast".... Carrie put on her goggles and was staring straight in the face of the biggest barracuda I have ever seen.... As soon as she entered the water this predator fish swam from under the boat directly to her.... It was fight or flight mode at that moment..... Carrie bravely took off after the fish, the fish moved backwards, and then back at her again, she then took off after it and finally scared it off. She quickly made her way to the boarding ladder, jumping out of the water as quickly as she could. After regaining composure, she looked up at the 3 of us standing there laughing hysterically at the event that had taken place, by Ian's delivery of the news of the even, and at Dave's comment again..... Dave has spent enough time in this part of the world to know that 6am is barracuda breakfast time.

A Midnight in Paris...

Paris February 2015.  At the invitation of Jeanneau, Mark Jefferies and I made a bit of a whirlwind trip to Western France to meet with Erik Stromberg, Director of Production at Jeanneau , in their new facility southwest of Nantes.  This was my second trip to meet with Jeanneau at their factory headquarters and MJ’s first trip to Europe.  So we made it a priority to mix a little fun with business.

Our goal this trip was to get ahead of the curve on the brand new Jeanneau 64 line.  Lead by Erik Stromberg, Jeanneau invested multiple millions of Euros in building out a new factory production facility for the 64.  We got a first hand guided tour for an entire day where we were able to examine the boat in all its stages of finish and construction.   This was our chance to see behind bulkheads and liners.  We saw where various electrical, data, and plumbing lines are joined and terminated without all the cabinetry installed.  We discussed with Erik the merits of the various product being installed and the options the factory was now taking on there in France.

Our take away?  Excited hardly describes it.  Jeanneau is about to rock the production boat world.  Last year there were only 33 production boats built over 62 feet long.  On order now with Jeanneau for the 64……well I was sworn to secrecy, but I can assure you this, world wide production of same size boats (if other manufacturers hold the same numbers) will nearly double.  The 64 is a hand crafted boat, being ushered out of the factory in an assembly line production.  Erik has brought “yacht” level finishes to the Jeanneau build technique.  The result, a large performance yacht that can be managed short handed.  The system mechanics are products that Jeanneau has had years upon years of familiarity, and coupled with the new design, we expect a real shake up in the market place for these size boats.

Now the real reason we cannot show any photos from inside the facility, we were lucky enough to hop aboard another Jeanneau while in the production facility.  It is hull #1 and a little smaller than the 57.  This boat will wow any boat show anywhere!  Erik has taken the upgraded design and finishes seen on the 64, plus some really innovative features and put them on another slightly smaller boat that can also truly be called a yacht.  From sail handling to design, both Mark Jefferies and I noted that the factory has really raised the bar.  We are now seeing what were once custom after-market upgrades, now standard features aboard.

I have been assured by Jeanneau, that we will be getting our hands on several new lines this year and look forward to again, working in close partnership, presenting a product we believe delivers.

After a packed 48 hours in Western France I stayed on to spend the weekend with my daughter whom lives in Paris.  Mark J was able to speed off via high speed rail to see friends in London before we rendezvoused Monday for the long ride back home.